To Mass Media and NGO-s

Following the planned suspension of Teghout plant operations Vallex Group of Companies has received numerous inquiries from the mass media and NGOs regarding not only the plant shut down itself, but also the various aspects of our activities, including our overall economic, financial and performance indicators.

In response to those inquires, we present the following comprehensive overview:

As compared to 2016, the year of 2017 was more efficient for all the companies of the Vallex Group. We have recorded an unprecedented growth both in our output and in our financial-economic indicators.

Thus, according to the figures of Table № 1, processed ore volume for 2017 has exceeded the same indicator for 2016 by 2 million tons, reaching the capacity of 12 million tons of ore for 2017. Copper concentrate output increased by 31,000 tons, exceeding the threshold of 200,000 tons of copper concentrate for 2017. This is an unprecedented achievement in our history, which was primarily due to commissioning of the second phase of operations at our Kashen plant (Base Metals Closed Joint Stock Company) in April-May 2017. 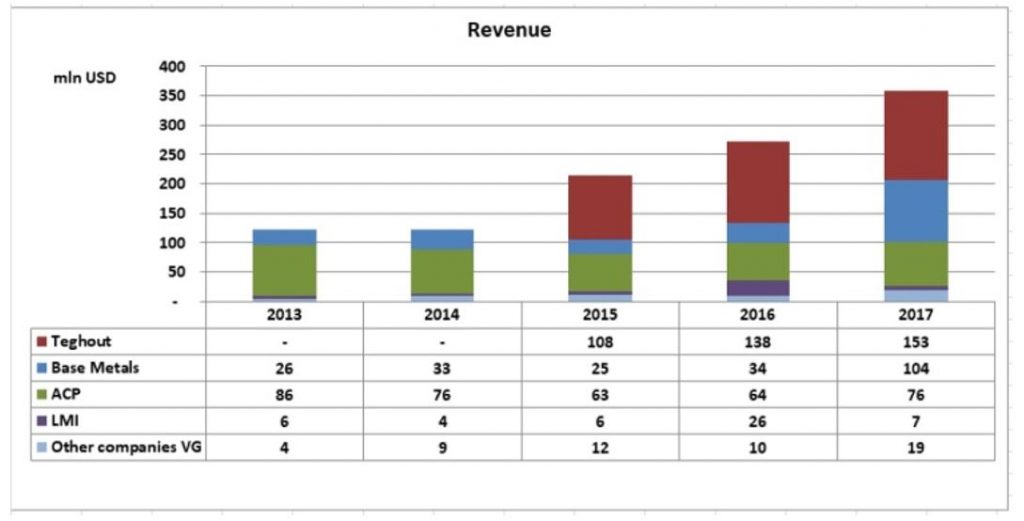 The Chart № 1 reflects revenue growth dynamics of companies’ of Vallex Group. As you can see, from sales in goods and services in 2017 we generated $ 358 million of revenue as compared to $ 272 million in 2016. This is a record level of revenue generation, and it was driven by an increase in output of copper and molybdenum concentrates production, as well as by an increase in copper prices in 2017 as compared to the preceding year.

The aforementioned favorable business environment coupled with an increase in production output allowed us to contribute significant amount of taxes to the budgets of the two Armenian states – the Republic of Armenia and the Republic of Artsakh. The revenue generated by the operations of Teghout CJSC was applied to further reducing the debt and strengthening Company’s balance sheet. 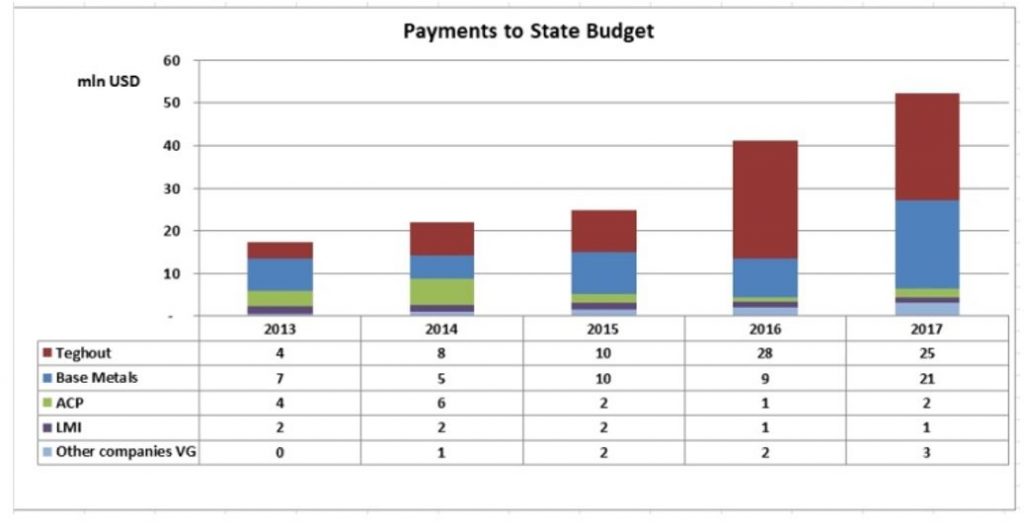 Chart № 2 shows taxes that have been contributed to the state budgets (both Armenian and Artsakh). We reached a record level by paying more than $ 52 million in taxes and duties, as compared to $41 million paid during 2016. 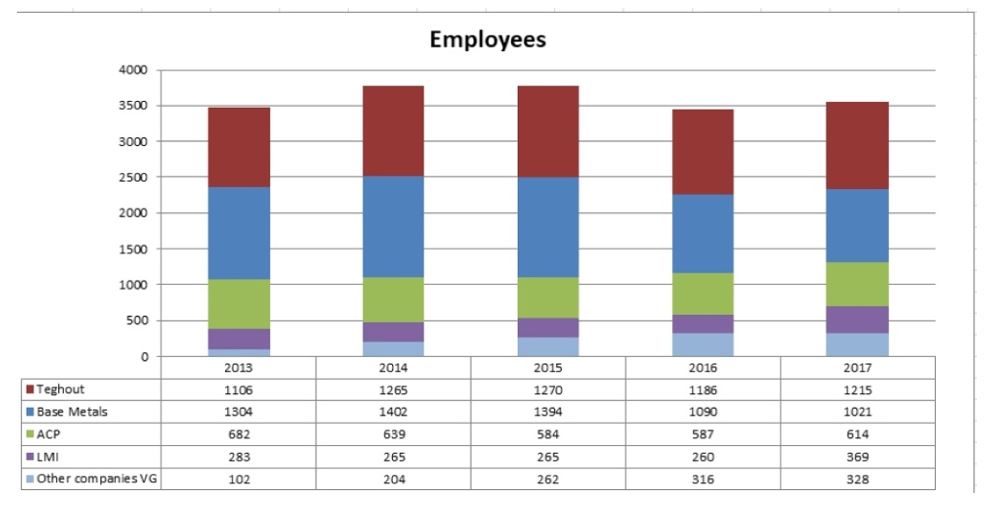 According to the Chart № 3 we have managed to establish a relatively stable employee turnover with 3500 registered employees. 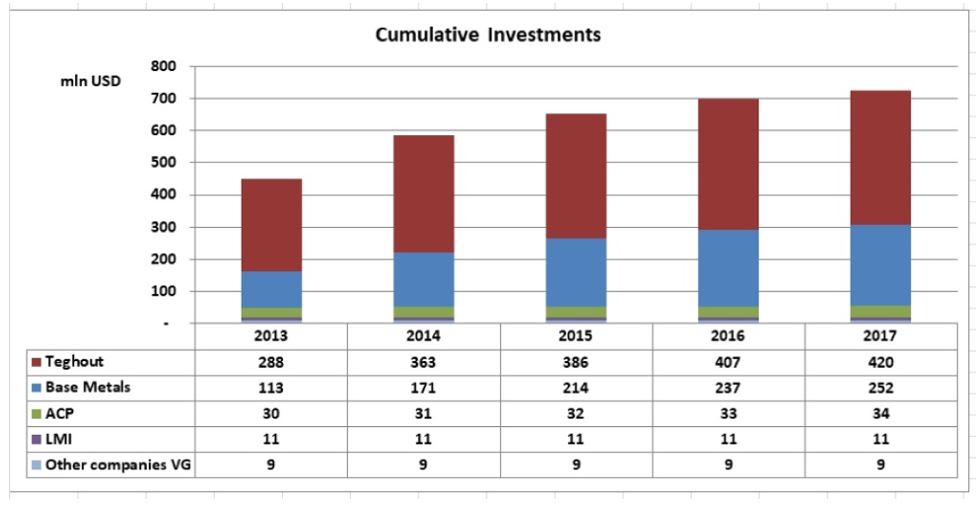 The Chart № 4 shows the total amount of all the capital investment and expenditure inflows into the economies of the Republic of Armenia and the Republic of Artsakh, contributed throughout the 20 years of our operations, starting from 1997. Those amounts exceed $726 million.

Major Production Companies of Vallex Group and their targets for 2018

The Company has commenced the year of 2018 with stable operations. The production for January 2018 is expected to exceed 9,500 tons of copper concentrate. The Company has set two major targets:

In December, 2017 an EPC (Engineering, Procurement and Construction) agreement was signed in Beijing with Chinese CITIC Group pertaining the feasibility study and launch of the initial phase for establishing an Armenian-Chinese joint venture for refined copper and copper products manufacturing operation in the Republic of Armenia. The project is expected to be financed primarily through Chinese lending institutions. This is a technically complex and a rather challenging project as numerous technical issues still remain unsolved due to peculiarities of Armenian market.

Teghout copper-molybdenum plant was commissioned in December 2014, and upon three years of uninterrupted operations with high performance indicators, as of 12 January 2018 ceased the production of copper and molybdenum concentrates due to planned preventative maintenance works. This temporary shut down may last up to two months or more depending on the time required to come up with a comprehensive strategy aimed at ensuring the compliance of the tailings deposition parameters to higher standards. This issue is of a particular importance due to its impact on the envisaged expansion of production in coming years.

We expect the 2018 to be a difficult year for Teghout CJSC as beside the aforementioned challenges with relations to technological or operational issues we have to comply with our financial obligations stemming from our loan agreements.

Teghout CJSC currently continues its preparatory activities aimed at increasing the processing capacities on its Teghout copper-molybdenum mine site. In particular, we have completed the amendment to the environmental impact assessment report on the project of “Expansion of Teghout Copper-Molybdenum Plant up to 15 mln Tons of Ore per Year” and other ancillary documents. These activities have been carried out in full compliance with the Technical Proposal № TA 44 issued by the Center for Environmental Impact Assessment on 31.08.2017, as well as with other requirements of applicable mining legislation as amended in 2016-2017. The completed and renewed application package will be submitted to the Ministry of Energy Infrastructures and Natural Resources of RA in order to be granted the required permits and licenses.

For further information, please, refer to the link below: