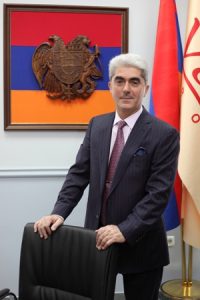 Valeri Mejlumyan was born on 02.04.1951, in Alaverdi city of Toumanyan region.

Education
In 1969, finishing the secondary school after S. Shahumyan of Alaverdi with a gold medal, he entered the Moscow University after M. Lomonosov, the mechanics and mathematics faculty (specialization – Liquids, gases and plasma mechanics).
In 1981-1984-s Valeri Mejlumyan studied in the hydromechanics department of post graduate school of the same university. V. Mejlumyan has a PhD in Physics and Mathematics: the dissertation topic – “First stage calculation of the collision of deformable bodies moving in supersonic speed”.

Work activity
In 1977-1981-s as a senior engineer he has worked in Moscow All-union scientific-research Institute of Electrothermal Equipment, Moscow, RF, where he was engaged in elaboration of the equipment and technologies of melting the non-ferrous metals and their alloys.
In 1983-1987-s he has worked in Moscow Mechanical-Engineering Institute as a lecturer of mathematics.
In 1984-1987-s he was working as a research associate in Moscow Institute of biomedical problems, where he was involved in the issues of medical provision of “Mir” orbital space station.
In 1987-1988-s V. Mejlumyan was a research associate in the Scientific Research Institute of Mechanics, under the Moscow University after M. Lomonosov: here he was engaged in the issues of application and elaboration of the new polymeric substance on the mineral base. more>>>

Activities in Nagorno-Karabakh and Armenia
As from 1997 Valeri Mejlumyan started his activity in Armenia, establishing several trade companies:
In 1997 “Armenian Copper Programme” CJSC (formerly named “Manes & Vallex”) was established, within the framework of which on some productive infrastructures’ basis of Alaverdi mining-metallurgy factory in 1997 blister copper production started. Recent years, the company provided 60 percent turnover of Lori region, creating jobs for about 700 people.

In 2002 in Artsakh “Base Metals” CJSC was established. The company has constructed and now is operating Drmbon processing Plant in Martakert region of Nagorno-Karabakh republic. From the very beginning “Base Metals” CJSC has been the biggest tax payer of Artsakh, providing up to 35 percent taxes to the state budget and job places for 1200 people. Making investment in geological works “Base Metals” CJSC in 2012 could complete and bring into a proper level for operation the information on the stocks of Kashen copper-molybdenum deposit. The company now is realizing a new investment project on the construction of a newer and updated cutting-edge mining complex on the base of the copper-molybdenum deposit. This project will ensure economic development perspectives in Artsakh.

In 2012 was funded “Vallex Garden Hotel” CJSC, which exploits the sport and health hotel complex, constructed by “Vallex Group” companies in Stepanakert, Nagorno-Karabakh republic. Investment of 15 mln. USD has been made towards the construction of this complex and about 100 people were provided with jobs.

Valeri Mejlumyan is an honorary citizen of Alaverdi.